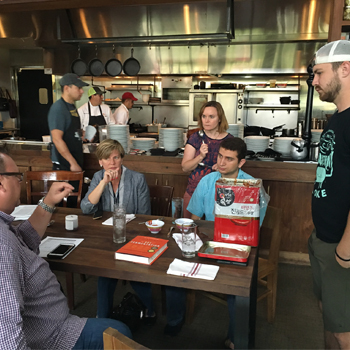 When Tareck Haykal ’19 first signed up for his laboratory courses as a freshman, he had no idea that it would be the start of a partnership with Chris Shepherd, the James Beard award-winning chef and owner of the Houston restaurant Underbelly. The restaurant’s mission is to translate the diverse culture of Houston into food by sponsoring local farms, typically buying out their produce for use in the restaurant. To prevent waste, any surplus is converted into functional products. One method is to ferment extra grapes and pears into alcohol and then convert them into vinegar.

Underbelly tried to produce vinegar through spontaneous acetification, which involves storing large vats of wine in wooden crates and waiting for natural cultures of bacteria within the wine to turn the wine into vinegar. However, this method was not only slow and inefficient, it also failed to produce a satisfactory vinegar taste even though the alcohol had clearly converted to acid. Shepherd and Rice lecturers Sandra Bishnoi and Michelle Gilbertson encouraged students in Natural Sciences 120 and honors general chemistry to investigate this problem.

Haykal’s group was tasked with unraveling this mystery and providing an alternative method of producing vinegar. They first learned how the alcohol in wine is oxidized into acetic acid, a key component of the acidity and taste of vinegar, through the metabolic processes of an acetic acid bacteria, Acetobacter. “We looked at the alcohol, acidity and sugar,” said Haykal. “We found that their vinegars are extremely alcoholic, more than the average wine.” This implied that there were no bacteria to convert the alcohol into acetic acid. After nearly a semester of hard work, they had a breakthrough. They found that the acidity obtained through the Underbelly production method was not acetic acid, but rather lactic acid, a waste product of bacterial fermentation that imparts the spoiled flavor of sour milk. The students found that the simple addition of mother of vinegar, which contains the needed Acetobacter, increases the amount of acetic acid in as little as two weeks.

Haykal made so much progress during the year that he was invited to continue working on the project as an Underbelly employee during the summer. Under Shepherd’s guidance, he quickly learned to navigate the restaurant, managing his own timeline and learning real world skills that can be applied to any profession. “I worked from an office right inside the kitchen, next to the chefs and sous chefs.” Haykal said. “I was doing the same procedures [as in a traditional lab setting], but the feel of it was different. I got to study science in an environment I really enjoyed.”

Haykal hopes others recognize the broader applications of Underbelly’s projects beyond the creation of fine food. Through Shepherd, Underbelly has been a huge driving force of the local economy for years by buying massive amounts of food locally. He gives this food right back to the community, first adding value through his renowned cooking to foster a sense of communal warmth. “There is a lot of potential for [the vinegar] project,” Haykal said. “It aims to give waste purpose and bring these items with new value to areas where people do not have access to food.” This philosophy of maximum utility provides an important social contribution to Houston.

For Haykal, this is what makes Underbelly unique. “I was immersed in this collaborative environment that had such energy and passion, making something to meet a concrete goal that had a true impact [on the community],” he said. “It was impossible not to dream bigger.”