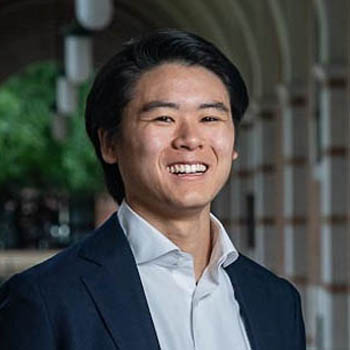 Senior physics major Takuma Makihara conducts research on quantum optical phenomena in condensed matter in Junichiro Kono’s group. What does that mean? “Quantum optics is a field of physics that looks at the interaction between atoms and light,” he explained.

“This is a very mature field of physics that has made pioneering discoveries in quantum information processing,” said Makihara. The problem is that while physicists know how to describe the interactions of a few atoms with light, “it lacks scalability,” he said. In the class of magnetic materials that Makihara studies, however, “we recently found that they can display quantum optical phenomena,” he said. “We have found analogous phenomena to what people have studied in atomic (or quantum optical) systems, but now in real materials that you can make devices out of.”

Besides exhibiting previously-investigated behavior on a larger scale, the solid state systems Makihara studies provide a platform for studying new effects entirely, he explained: “we don't have a few particles interacting with light; we have 10^23 particles interacting with light. This gives rise to so-called many-body interactions that can be exploited to explore novel regimes of light-matter interaction.”

A unique system in the Kono lab empowers Makihara to probe quantum optical effects in these materials as he could nowhere else. “I work with a system known as the Rice Advanced Magnet with Broadband Optics, or RAMBO for short. It combines strong magnetic fields with optical measurements -- a rare and powerful combination of experimental techniques,” he said. The RAMBO system houses a magnet that can produce a field of up to 30 Tesla and applies ultrashort laser pulses to samples. This allows investigators to simultaneously subject materials to two extreme conditions and push them to limits that haven’t been studied by scientists before.

Through his research experience and academic merit, Makihara was chosen from among 1,280 STEM students nationwide to earn a Goldwater Scholarship for the 2019-2020 academic year. In an interview for the Rice News article announcing his achievement, Makihara pointed out the global impact that opportunities supporting science and technology researchers can have: “I think STEM research is important because science is a universal language — especially in academia, research is constantly being published and shared around the world. I love how that creates a global community of individuals from vastly different backgrounds collaborating on the same project and working towards a meaningful goal.”

Of all the STEM subjects, Makihara finds physics the most intellectually inspiring. “I chose to study physics because I enjoyed the way physics courses pushed me to think. They force you to reason about problems using first principles,” Makihara said. “To me, physics feels less like ‘plug and chug’ and more like ‘look what you can do with a few simple tools.’ I find that pretty exciting.” Motivated by this passion, Makihara will pursue a Ph.D. in applied physics after graduation.