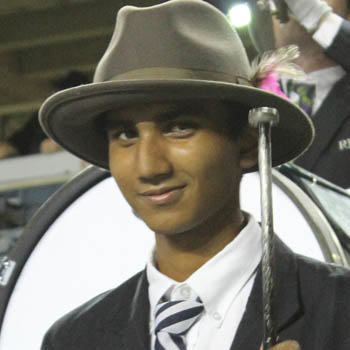 When asked why he chose his field of study, freshman Chemistry major Sanjay Pandiri quoted the great 20th-century chemist Robert Woodward: "I love crystals, the beauty of their form—and their formation; liquids, dormant, distilling, sloshing!; swirling, the fumes; the odors—good and bad; the rainbow of colors; the gleaming vessels, of every size, shape and purpose. Much as I might think about chemistry, it would not exist for me without these physical, visual, tangible, sensuous things."

Pandiri loves chemistry for the laboratory experience as much as for the challenging problems he gets to solve. “You can find problem-solving in pretty much any natural science major, but the lab is what draws people to chemistry,” he said. “There is also an aesthetic side to chemistry that I think sets it apart from the other sciences.”

Pandiri fell in love with chemistry after seizing the rare opportunity to study organic chemistry in high school. “I was fortunate to have a great organic chemistry teacher who instilled within me a passion for science and chemistry in particular. It was the organic side of chemistry that first captivated my imagination and led me to the study of molecules,” he explained.

Pandiri has found another outlet for his chemical curiosity through his work in Laszlo Kurti’s organic methods development lab. While he has sampled several projects during his semester of research and does not yet know what his future investigations will focus on, he does have a clear goal: “Being able to come up with a new reaction or an elegant synthesis would be the coolest thing I can imagine, so I'm always striving towards that,” he said.

Pandiri appreciates not just the successes of research, but also the challenges of experimental trial and error, explaining, “I'm more excited in the lab when I make mistakes than when I don't make mistakes. Obviously, I take care not to harm anyone through mistakes, but other than that, I like the fact that I'm always learning and that I'll be better prepared for graduate school as a result.”

Even the most enthusiastic scientists need a break sometimes, and Pandiri enjoys the relaxation of playing music with the Marching Owl Band (MOB). This year, he has played percussion and marched in the halftime shows at most of the Rice football games. “I like the MOB because everyone is super chill, which makes any event the MOB goes to a very low-stress environment,” he said. “I would definitely recommend joining the MOB to anyone who plays an instrument (or doesn't play an instrument).”

After graduation, Pandiri plans to earn a Ph.D. Until then, he will continue delving ever deeper into the study of our world on a molecular level.