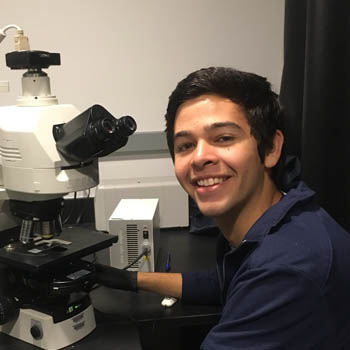 CHRNA7 (Neuronal acetylcholine receptor subunit alpha-7), the protein encoded by the CHRNA7 gene, forms part of a receptor that lives in the membranes of neurons. The receptor is a calcium channel that opens upon binding the neurotransmitter acetylcholine.

According to Ricky, “CHRNA7 is very important for cell survival and avoiding neural death.” The gene has been linked to everything from “behavioral disorders — such as bipolar disorder, schizophrenia, and autism — to intellectual disability and speech disorders.”

So why does an overload of CHRNA7 produce the same results as an underload? In the lab of Dr. Christian Schaaf at the Jan and Dan Neurological Research Institute at Texas Children's Hospital, researchers had a hypothesis, but it had not been tested. They believed that an excess of CHRNA7 might overwhelm the cell’s protein-assembly machinery and initiate a process called “ER [endoplasmic reticulum] stress.”

As Ricky explained, “In the process of being overwhelmed in this way, the cell is either not folding these proteins properly or not transporting them to the membrane, so the end result of both a duplication and a deletion is the same: not having enough of the protein in the membrane.”

To test this hypothesis, Ricky mutated the copies of CHRNA7 in cells with duplications of the gene. The effect of the mutation was to change the location of the protein encoded by CHRNA7 so that it wouldn’t “get stuck in the ER.” In case any of you were picturing very tiny scalpels, ER means endoplasmic reticulum, the organelle that assembles proteins. In fact, the mutation did rescue the cells. His results strongly supported the ER stress hypothesis.

Said Ricky, “It was a very exciting moment when I saw that the work I had started several months before had actually worked, and it actually could lead to treatment. There are a lot of known ER stress-relieving drugs, and we could try those as new ways to treat disorders associated with CHRNA7 duplication.”

Ricky credits the Rice Sustaining Excellence in Research (SER) Scholars Program with helping him get into Dr. Schaaf’s lab. SER Scholars is a program for STEM students during their freshman or sophomore year that assists them during the beginning of their research careers. SER provides resources such as mentor matching, pay for research, and a network of supportive peers. “It’s been helpful having a network of other people in the same field also doing research. So when an experiment just isn’t working, you have someone to rely on.”

Working with Dr. Schaaf also shaped Ricky’s own path. He arrived at Rice, in his words “very pre-med.” But after a few shadowing experiences sophomore year, he decided, “the medical route wasn’t quite the fit; I wasn’t going to be as happy day to day.” He joined the Schaaf lab soon afterwards to decide whether he might prefer a career in research. “I ended up spending much more time in lab than I ever needed to just because I enjoyed it so much. I lived off the project,” said Ricky. Apparently, he must love the project as much as he claims: he’s willing to chase it across an ocean.

Ricky is not currently working in the Schaaf lab because Dr. Schaaf, a German native, recently accepted a job in Germany as Director of the Institute of Human Genetics at the University of Heidelberg. However, Dr. Schaaf invited Ricky to come work with him after graduation, and Ricky plans to take him up on the offer in order, hopefully, to see his project bear fruit. “The next phase of the project is that I’ll be working with induced pluripotent stem cells to test those various treatments [for relieving ER stress in CHRNA7 duplicated cells].” Ricky didn’t know any German at the time he received the invitation, but “I’m taking German classes right now so that I’ll be able to survive over there. Luckily, the lab is in English, so that should help.”

Ricky offers the following parting advice for young student-researchers: “Put yourself out there. Don’t be afraid to go for the big shots. It may seem intimidating, but it’s not out of your reach. Nothing is impossible and nothing is out of reach.”