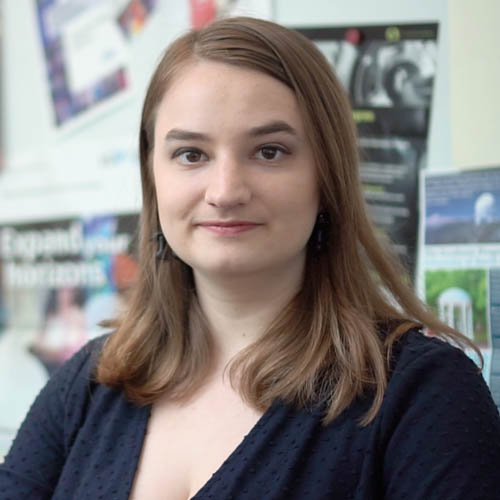 Imagine having to tell the difference between corn starch, powdered sugar and baby powder from far away, without being able to touch them. When Rae Holcomb ’19 was a child, a scientist presented her with this challenge and demonstrated how to do this by bouncing light off the powders. This demonstration took place at NASA — where scientists gather information every day from objects in space too far away to touch — and sparked Holcomb’s interest in astronomy. As an astrophysics major at Rice, Holcomb has been following that inspiration and measuring distant stars in ways like never before.

Working with Patrick Hartigan, professor of physics and astronomy, Holcomb began looking at Herbig-Haro objects — bright dust clouds associated with newborn stars. Unlike most other astronomical phenomena that take course over millions or billions of years, these objects are unique because the gas clouds change dramatically on human time scales. Holcomb was able to see just how the gas was moving and evolving over time by comparing images of the baby stars taken by the Hubble Space Telescope in 1998 and 2018. She was watching astrophysics happen right in front of her eyes. 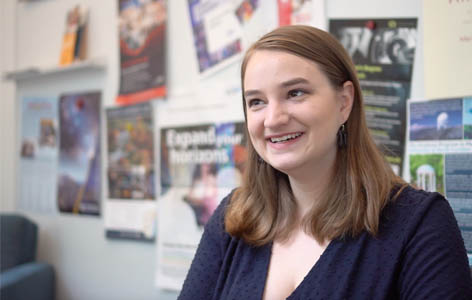 The images Holcomb used were the highest quality images ever taken of these objects. “It was so cool to be part of a research team that was working with this quality and caliber of image,” she said. “The first time I booted up that image I was probably the sixth person in the world to ever see that object in that level of detail,” she said. “You feel special sometimes, like you’re the only person who knows this thing.”

For her senior thesis project, Holcomb used the light emitted by stars to determine their age. “Sometimes light is the only thing we can know about an object,” she explained. Just like the scientist who identified the powders using light, Holcomb used light to measure how fast stars spin — and therefore their age. Stars that are younger tend to spin very fast. “As the star gets older, it starts to slow down, like we all do,” Holcomb said with a smile. To find out how fast each star is spinning, Holcomb created an automated program that looks at satellite data and measures the rotation of distant stars. This program detects features — like a sunspot on the star — and tracks their motion in order to measure the star’s rotation speed. With this data collected for over 90% of the sky, Holcomb is helping to create an incredibly detailed map of the ages of nearby stars in the Milky Way Galaxy.

Holcomb found that the biggest challenge she faced in this project was filtering such a large quantity of data to gather the information she wanted. “Getting interesting, useful answers out of such a large quantity of data is going to be a huge problem in astrophysics going forward,” she said. Holcomb will continue solving this star-sized problem in graduate school at the University of California, Irvine.