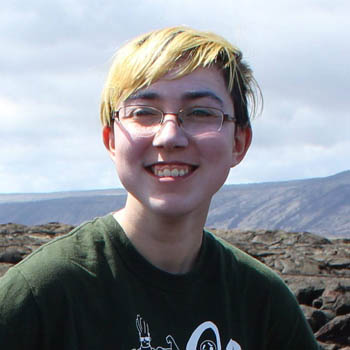 “I came into college knowing I wanted to do something in science, but I didn’t know what,” said junior earth science and visual and dramatic arts double major Meagan Hale. “I didn’t really even consider earth science until the major fair during O-Week when I had a long conversation with one of the professors in the department.” She was drawn in by the interdisciplinary nature of the earth science major, where geoscientists apply what they know about math, physics and chemistry to studying our planet — and also by the opportunity to take field trips and work outside while learning by experience.

The small size of the Earth, Environmental and Planetary Sciences department makes it easy to connect with faculty and the coursework offers hands-on learning opportunities in the labs and field work. “My favorite class in my major was the course covering sediment transport. It wasn’t so hard that it stressed me out, but it was fun and I felt like I really learned something,” Meagan said. “And if you like looking at rocks and minerals, the earth chemistry and materials course is good for that. The labs are pretty much all mineral identification.”

Many core courses in the department include a field trip component, often to California or New Mexico, but Meagan fondly recalls her favorite field trip. “A brag moment here: we took a six-day, all-expenses-paid field trip to Hawaii!” she said. “That was just the coolest trip ever.”

The small size of the department also makes it easy for earth science majors to connect with research opportunities. Meagan has been working with Mark Torres studying sediments from the Western Irish Namurian Basin to determine if they formed under freshwater or marine conditions. “To determine the elements inside our rock samples, we pretty much dissolved them and then ran them through an elemental analysis machine. If they came back having a high calcium content, it may mean that those sediments had been in the ocean at one point in time,” she explained.

One particular research task stands out to Meagan: using a rock saw for five hours straight. “I still have my hearing! Thank you to the guy who made me wear earplugs even when I thought I might not need them,” she recalled.

Now, Meagan is starting to think about her senior research thesis and deciding on her plans for after graduation. “I’m going to grad school for sure. What exactly I’m going for, I haven’t decided yet; it’s between atmospheric science, hydrology and scientific illustration.”

Outside of her major, Meagan plays mellophone in the Marching Owl Band (MOB) and has started to play the piano after taking a beginner music course in the music school. She recommends that students take advantage of opportunities like these outside of their major. “If you have room in your schedule, definitely take Intro Drawing with Josh. I took it as an art major, but there are tons of non-art people who take it too because it’s beginner-friendly,” she said.

She also enjoys exploring Houston and has many recommendations to share. “I come from a small-ish town and don’t have a car, so the ability to go places on the metro and actually have things to do is incredible,” said Meagan. “A few recommendations: Kura Revolving Sushi Bar—it’s a little expensive but SO COOL. They slide the sushi down conveyors to your table; Ramen Tatsu-ya — get the Tsukemen; the Houston Museum of Natural Sciences — free with Rice ID; The Chocolate Bar; Art Supply on Almeda if you like artsy stuff; and the Contemporary Arts Museum — free.”

For students considering Rice, Meagan had this to say about the sense of community she has found here: “Everyone here gives off a sense of genuinely caring about others and wanting them to succeed. The friends I’ve made here are the best I’ve ever had.”