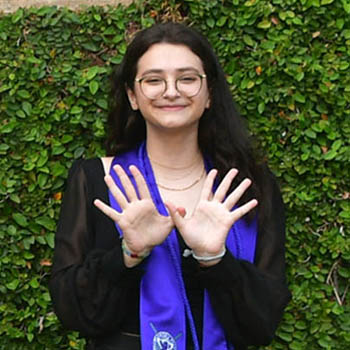 Blood vessels play a critical role in our bodies, supplying oxygen and nutrients to all of our organs and tissues. The blood vessels in our central nervous system — known as the blood-brain barrier — have special properties that allow them to regulate the movement of ions, molecules and cells between our blood and our brain. Senior biochemistry and cell biology major Jannie Matar, working in Dan Wagner’s lab, used the unassuming tropical zebrafish as a model organism to study neural angiogenesis, or the development of blood vessels in the central nervous system.

Scientists use many different techniques to understand genetic causes of human disease, but if they want to determine the involvement of a specific gene, they need to use model organisms. At first glance, you might not think that humans have much in common with the 2-inch long zebrafish, but, actually, 70 percent of human genes are found in zebrafish.&nbsp

Zebrafish have a few other advantages as well: they are small and like to live in large groups, making them easy to house; they breed regularly, ensuring a large number of offspring to use in experiments that often require multiple measurements; and their embryos are nearly transparent, allowing researchers to examine internal structures — like blood vessels — with only a low-power microscope.

“My project focused on identifying and characterizing genes involved in neural angiogenesis in the blood-brain barrier of zebrafish,” said Jannie. To do this, she used the genome editing technique CRISPR-Cas9. Adapted from a naturally occurring gene editing system in bacteria, the CRISPR-Cas9 system allows researchers to add, remove or alter genetic material at specific locations in the genome.

In order to investigate angiogenesis, the Wagner lab uses CRISPR-Cas9 to create zebrafish with mutated genes that affect development, like angiogenesis. They apply genetic, molecular and embryonic approaches to determine the precise nature of the mutations and the defects that they observe. Jannie’s work identifying genes involved in angiogenesis is helping to improve our understanding of essential developmental processes that, when misregulated, can lead to human disease.

Working as an undergraduate researcher built on Jannie’s favorite part of being a biochemistry and cell biology major: the lab work. “My favorite thing about the biochemistry major had to be the wet labs we did! The projects were all open-ended and client-based projects and were so fun to complete,” she said. Jannie also appreciates the supportive and fun learning environment created by the biosciences faculty. “Dr. Catanese was one of my favorite professors! He really makes sure his students are learning and having fun. Also, he really believed in me and helped me through my time at Rice!”

Outside of the lab, Jannie was also involved in college government and with the Rice Women’s Resource Center, including acting as its director this year. “I really value the time I spent at the Rice Women’s Resource Center! I’m a feminist and enjoyed being able to engage with other feminists on campus,” she said. “It was rewarding to be an advocate for women on campus and to try to make sure their needs were met."

Jannie also enjoyed exploring Houston, when the weather cooperated. “Houston is a cool city with a lot to offer! The weather is nice when it wants to be, and the food is great! I loved taking trips to Chinatown with friends and trying new cuisines.” she said. “Also, since Houston is a big city there are always really cool artists coming for concerts. I got to see so many awesome shows during my time here!”

As she prepares to head to medical school next year, Jannie reflected on her time at Rice. “I think that Rice is a really great place where you can grow as a person and a student,” she said. “I formed so many relationships at Rice that I wouldn’t trade for the world.”