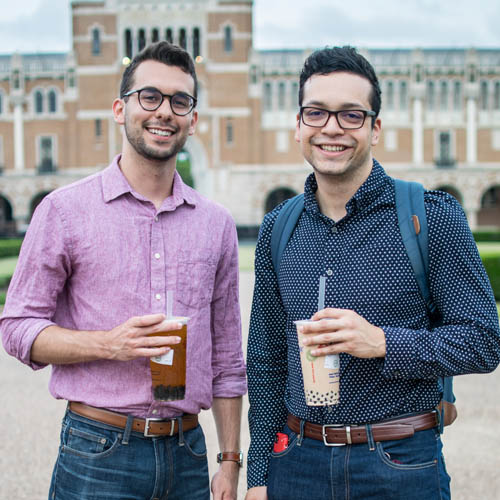 Do you love boba enough to make your own probiotic tapioca pearls?

That’s what Omar Alvarenga ’19 and Gabriel Gomide ’19 set out to do for their semester long research project in the BioInnovation Studio, developed and taught by Collin Thomas, lecturer of biosciences. A brand-new course in fall 2018, BioInnovation Studio, explores the relationship between curiosity-driven science and the steps of biological ideation that ultimately lead to technology creation.

“I want my students to realize that it is possible to pursue new knowledge and make a living by using science to deliver a product based on the questions that they find exciting,” Thomas said. “The majority of them might become research clinicians in hospitals or scientists working for governements or academia, but they will carry with them a bit of roguish play and a knowledge that they are always free.”

Given their shared love for boba, Alvarenga and Gomide set out to develop a prototype that incorporated Lactobacillus acidophilus, a beneficial bacteria commonly found in human intestines, into boba drinks. As a potential supplement for individuals with low probiotic levels, these infused pearls aim to strengthen the digestive tract while also pleasing taste buds.

The first challenge the pair faced was incorporating the probiotics into the tapioca pearls. They couldn’t use the common method of boiling the boba as this step would kill most bacteria. Instead, they relied on a potentially bacteria-friendly method that was fully cooked at low temperatures. Assuming the probiotic bacteria were present in their boba, Alvarenga and Gomide faced their second challenge in producing an effective prototype: the probiotic boba has to survive the extreme conditions of being chewed up and drowned in stomach acid in order to arrive at its final destination in the large intestine.

To test whether the probiotics in boba would remain viable after digestion, the team simulated the conditions of the human stomach. “We wanted to simulate the stomach moving because we knew people digested through the churning motions of the stomach,” said Alvarenga. To do this they used a shaker with motors that agitated the samples in acidic medium. After six hours of churning, the team plated samples on agar to allow any surviving bacteria to colonize. Alvarenga and Gomide were disappointed to find that the plates showed no colonization. This meant that somewhere in the cooking and digestive process, the bacteria had died.

Their project, however, is not dead. The duo wrote up an in-depth report with a series of next steps that can be passed on to future students. To Gomide, the legacy of their project is to “open the door for other students in the next semester to take up our idea and put their own spin on it.” Having seen a passion and an idea turn into a promising series of experiments, Alvarenga and Gomide believe future students will also find reward in making probiotic boba. Leaving the project in the hands of Rice students — including members of East West Tea, the on-campus boba shop — felt reassuring for the project starters.

“The best part is just knowing that someone else is excited and wants to work on an idea that you developed and were excited about,” Gomide said. As recent graduates and young Rice alumni, the pair feels this is a wonderful legacy to leave behind.