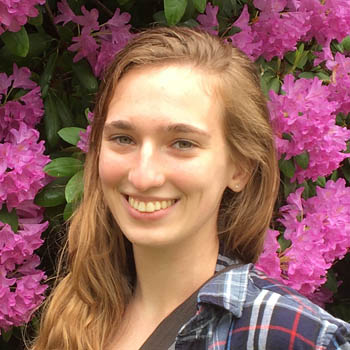 Like many Rice undergrads, senior Cassia Torczon cultivated a passion for a variety of academic disciplines during her K-12 education. “I came into Rice completely unsure what I would major in, even unsure whether I wanted to do STEM, Social Sciences, or Humanities, so I was taking courses in all kinds of subjects. COMP 182 (Discrete math for CS) one of those courses. I loved it, so I started the COMP major,” she said.

As part of her computer science major, she took Honors Linear Algebra and found it fascinating. “I think it was the first course where I got comfortable with proofs, part of which is because it was phenomenally taught,” explained Torczon. “Prof. Várilly-Alvarado taught linear algebra when I took it fall semester of my sophomore year, and afterward, during winter break, he sent me a really encouraging email suggesting I add the math major, based I think on my performance in and enthusiasm for the class. Having a professor put in that extra effort to encourage me to try math made my day. I did as he suggested, and it turned out to be a great decision for me.”

Over Summer 2018, Torczon combined her interests in computer science and linear algebra through a research internship. “I automated extraction of linear programming word problems from PDFs of textbooks and integrated those problems with natural language processing tools designed to solve them,” said Torczon

In 2019, she furthered her learning outside the classroom through a summer internship with Microsoft. “I worked on creating a pipeline to improve the speed of data accesses for certain data the team used,” said Torczon. “This was useful to the team because their work is data-heavy, so having quick data access is important; the project was useful to me personally because it was the first time I've had to think about handling data at that scale. It was novel to see the real-world constraints faced by a company like Microsoft where a lot of aspects of a project operate at a much larger scale and can affect a huge user base.”

She also developed an automatically-updating portal showing what her team had already done. “My team was fairly large, so having an internal tool showing what features of the team's product people had already created — and, more importantly, a tool that automatically updated itself every time someone added such a feature — helped avoid duplicate work,” Torczon explained. “Given that most projects I'd done previously had involved back-end work (behind-the-scenes mechanics) but not front-end work (the part the user interacts with), having a project that gave me ownership of both taught me how to think about making a product that not only works, but also makes intuitive sense to people I've never met. Even though my majors are both STEM, I think it's important to have good communication as part of my education, and the ability to communicate the way a product works through intuitive design is part of that.”

Outside this more traditional experiential learning track, Torczon has also learned invaluable communication skills and more through musical theatre. “I worked on lighting for six shows at Rice. Musical theatre is a lot of fun and the community is welcoming to new people,” she said. “Doing stage crew helps immensely with work ethic, staying organized under pressure, and working with a deadline. I think it helped the most with research because it taught me how to ask better questions when I don’t know how to do something — instead of presenting excuses for why what I tried didn’t work, stage crew taught me to come up with the best solution I can and then ask for feedback on that.”

After graduation, Torczon will be working in Seattle for Microsoft.