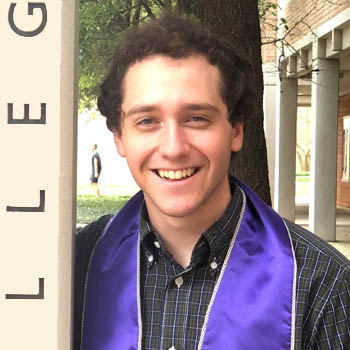 Senior Benjamin Ruben conducts biophysics research with José Onuchic in Rice’s Center for Theoretical Biophysics (CTBP). Working in an interdisciplinary field that applies traditional physics approaches to study living systems, biophysics researchers use insights from the study of biological systems to advance our understanding of the physics of all complex systems.

Every organism begins with the same building blocks of life: the four DNA bases (A, T, C and G). Genes are short segments of DNA that act as recipes for the various characteristics and functions of an organism. They encode proteins, which carry out biological processes in the cells. DNA is a very long polymer—if you took all of the DNA in one of your cells and stretched it out, it would be about 6 feet long. In order to compactly store all of our genetic information, the DNA found in our cells is tightly wound into structures called chromosomes. Benjamin’s research is focused on learning more about the properties of chromosomes.

“We are trying to figure out how well we can predict the mechanical properties of chromosomes from statistical information about their structure,” Benjamin explained. Specifically, he would like to understand how the changes in chromosome structure that occur throughout the cell cycle affect the chromosome’s elastic modulus—a quantity that measures an object’s resistance to being deformed when a stress is applied to it.

Researchers in the CTBP have used experimental information about human chromosomes to develop models that are helping them understand how genome architecture contributes to cell development and differentiation. “My work investigating properties of a model that nobody else has thought to test before is very exciting,” Benjamin said.

Scientific endeavors like this are collaborative efforts, and a core part of the CTBP mission involves outreach and education. Each summer the CTBP brings in undergraduate interns from other institutions to let them experience research at the leading edge of the biophysics field. “Spending a summer in the lab working with other interns from Japan and Costa Rica was a great experience. It was fun to get to know students from all over the world,” said Benjamin.

Graduating with a triple major in Physics, Chemical Physics and Mathematics, Benjamin is able to apply the skills he learns in the classroom to his research problems. “I chose my majors because I was really interested in the introductory math and physics classes that I took, and I was curious to learn more. Math and physics are applicable to a wide range of problems, and they force you to think really hard to understand what you are learning,” he said.

Outside of the lab, Benjamin enjoyed exploring restaurants in Chinatown with his friends and played on Rice’s club baseball team. “Club baseball gave me opportunities to travel all over Texas to play in games and tournaments and introduced me to many good friends. It was an amazing experience,” he said.

After graduation, Benjamin will continue his science education as he pursues a Ph.D. in biophysics at Harvard.