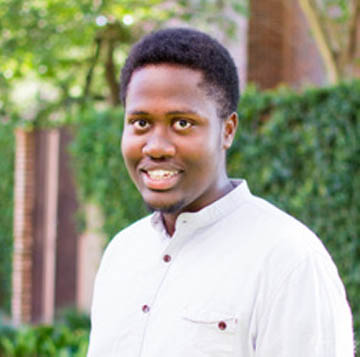 “Choosing the neuroscience major was an obvious choice for me,” said junior Axel Ntamatungiro. “I’ve always been intrigued by the fact that a three-pound, mostly lipid organ allows us to consciously — and unconsciously — interact with the world.”

One of the things that Axel likes best about the curriculum of the neuroscience major is its flexibility and the number of different approaches to studying the nervous system. “Through the core classes, you gain in-depth knowledge on key subfields of neuroscience — neurobiology, neuroengineering and cognitive neuroscience. Elective courses allow for further exploration in these subfields and related disciplines like developmental biology and philosophy,” he explained.

One course that particularly stands out as a favorite for Axel is Cognitive Neuroscience. “It was quite fascinating, especially learning how to read brain scans, interpret fMRI scans, and how to spot and avoid pseudo-neuroscience in news articles and research analysis,” he said.

He also has enjoyed volunteering with BrainSTEM, a program that brings hands-on neuroscience to middle and high school students in the Houston area. Working with faculty director Jon Flynn, students in BrainSTEM create and teach neuroscience lessons to students, enhancing their teaching, mentoring and science communication skills. “I’ve taken a number of classes with Professor Flynn as well as volunteered with BrainSTEM,” said Axel. “He has been a tremendous resource, mentor and guide for myself and all Neuroscience majors at Rice.”

In addition to his neuroscience coursework, Axel also conducts research with Dr. Atul Maheshwari at Baylor College of Medicine investigating the genetic mechanisms of absence epilepsy in mice models. They also are interested in examining the disease’s comorbidities — a condition that co-occurs with the primary condition. “One lab project is examining whether rodents with absence epilepsy are more prone to attention deficits?” Axel said. “If they are, does that generalize to humans who are diagnosed with absence epilepsy?”

Axel’s project is examining whether sensory deprivation — done via whisker trimming — is sufficient to induce seizures and abnormal background EEG in mice that normally don’t exhibit seizures, but have the genes for absence epilepsy. “The premise behind this project is that environmental changes may trigger a latent phenotype,” he explained.

When searching for a research experience, Axel was not originally focused on epilepsy research. “I was open to exploring research in different neuroscience subfields,” he said. “I like my current research because of its medical relevance and its connections to other neuroscience topics from attention to brain region asymmetry. I also like the small team atmosphere — there are only four people in my lab. I work with my labmates every day and regularly interact with my PI.”

Outside of the lab, Axel likes to read nonfiction; listen to modal jazz, jazz-fusion and lo-fi music; improv on the piano; and doodle abstractions. He is a former executive board member of the Rice African Student Association and was co-chair of the Increasing African Presence in Academia taskforce/committee for two years. He and classmate Zubaidat Agboola created the committee their freshman year. “The goals of the committee were to shed light on the fragility of the African Studies minor, gauge the student body’s awareness of Africa and advocate for the creation of a new African and African-American Studies major,” he said. “Extracurriculars contextualize and enrich my Rice experience in a way that my neuroscience major cannot do alone. Working in this committee has been one of the most meaningful experiences I have had at Rice.”