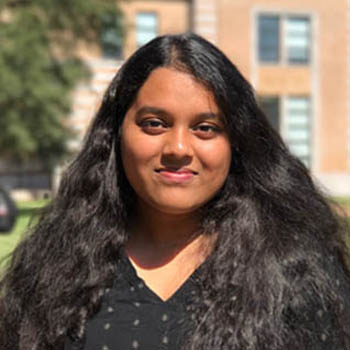 “I am really passionate about neuroscience and doing work to contribute to the knowledge of neurodegenerative diseases,” said junior Neuroscience major Andrea Augustine. This passion has guided her academic pursuits since even before she came to Rice. “During high school, I was involved in neuroscience research at Emory — I studied the amyloid beta peptide involved in Alzheimer's disease for two years. This greatly increased my interest in neuroscience and pointed me towards the careers of neurosurgery and neurology,” she said.

“My favorite thing about the major is the diversity in courses and flexibility that I have with regards to electives,” she continued. The wide breadth of the foundation and core courses — cognitive neuroscience, neuroengineering, cellular neuroscience, etc.— truly develop a great foundation for the major. There's such a great variety in the electives that you can shape the major to whatever interests you most, be it the biological, computational, psychological, or philosophical aspects of neuroscience.”

Not long after matriculation, Augustine threw herself into pursuing experiences related to neuroscience and neurodegenerative disease – and sharing those opportunities with others. “Rice Neuroscience Society has been a huge part of my undergrad career at Rice. I reactivated RNS during my freshman year. Since then, we have established two outreach initiatives for the HTX area: Brain Bee and NeuroCamp,’ she said. “It has been really cool to hear of incoming students at Rice who said that they have participated in one of our initiatives and enjoyed their experience. We also hold monthly events ranging from career panels to Halloween dissection events for the undergraduate population.”

“These activities have allowed me an outlet for application of what I have learned in the classroom and allowed me to translate that to initiatives that have direct impact on people,” Augustine explained.

In addition to her outreach work, Augustine has contributed to the scientific understanding of neurodegenerative disease. Working in the lab of Angel Martí from the Rice Department of Chemistry, she studies “the interaction of the amyloid beta peptide involved in Alzheimer's disease with various heavy metal complexes to discover ways to track and inhibit disease progression,” she explained. All humans have amyloid beta in their brains, but in people with Alzheimer’s disease, this peptide changes conformation into a form that’s no longer soluble in the cellular environment and aggregates into plaques that can disrupt neural function. Students in the Martí lab develop and utilize fluorescent probes to explore this aggregation process.

After graduation, Augustine plans to continue her education and build a career in medicine. “I recently got accepted to the Rice-UT Public Health Scholars Program, so I will be taking classes at the HTX campus of UT School of Public Health during my senior year and transitioning to their Master of Public Health program the year after,” she said. “After I receive my MPH, I am planning on going to medical school. My career goal is to practice neurosurgery or neurology, but also be involved in public health work”— a natural progression from her experiences at Rice.