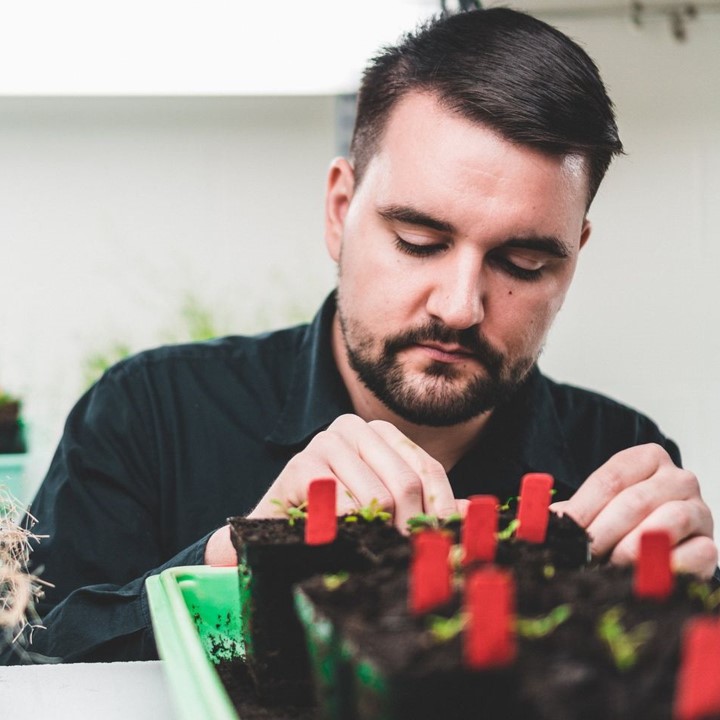 What Zachary Wright saw in the microscope was exactly the opposite of what he expected to see. As a graduate student working in Bonnie Bartel’s cell biology lab, he is interested in the structure of cell organelles, which is intimately tied to their cellular functions. The peroxisome is one of the organelles that, since the birth of the field of cell biology, has been assumed to be incredibly simple — basically empty sacks floating around in the cell. Because of the assumed simplicity of peroxisomes, Zach didn’t expect to see anything intricate in his images of peroxisomes. Just bags of protein outlined in green by the targeting fluorescent reporter.

That wasn’t what he saw. “At first, we didn’t know what we saw, except that it was just totally wrong for what we expected,” said Zach. Instead of seeing simple, mostly empty green circles, he saw complicated structures that were all lit up in multiple colors. He thought he had messed up and was looking at a completely different organelle. “But the more I imaged it the more I thought it wasn’t another organelle because the chance of all of the fluorescent reporters mistargeting to this one place was very low,” he said.

For Zach, seeing the true structure of peroxisomes happened accidentally. But, because his finding was so easy to see and ubiquitous, he kept pursuing the project. After years of research, Zach now knows that he had done everything correctly and that what was incorrect was our understanding of peroxisomes.

The structure and function of peroxisomes are actually very complicated. They are full of complex internal membranes and perform a suite of functions, including transferring material, protein sorting, and breaking down fats for energy. Many more functions are in the process of being detailed. “Some of the other functions are harder to say because it’s so radical we still don’t understand the depth of the effect that these internal membranes have on all the different processes that happen in peroxisomes,” said Zach.

Scientists had to re-ask the question of what happens in peroxisomes and how peroxisomes are implicated in cellular processes. In part due to his discovery, peroxisomes are now more actively researched in the field. Because peroxisomes are involved in aging and cancer development in humans, a better understanding of the structure and function of peroxisomes can potentially improve human health.