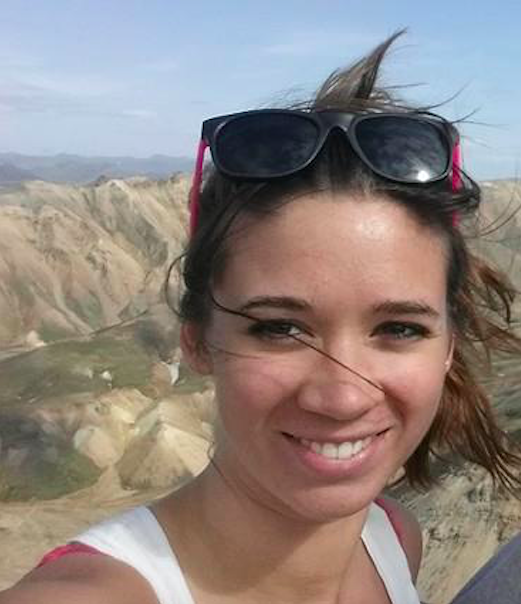 Valerie Payre, a post-doc in Kirsten Siebach’s and Rajdeep Dasgupta’s Earth, Environmental and Planetary Sciences groups, investigates Martian geology. Using data collected by the Curiosity Rover about the composition of rocks around the Gale Crater, Payre seeks to understand the history of volcanism in this region of Mars.

She discovered that the feldspars observed in the area around the crater could not come from a single type of magma. The magma chamber of the volcano would have filled twice with separate upwellings from the same mantle source to generate the two types of feldspars that the Curiosity Rover has observed – and at least one of those magmas would likely have contained water.

The image shows ternary diagrams displaying her results. In a ternary diagram of feldspar, samples with the highest potassium content are plotted at the top point, those with the highest sodium content at the left point, and those with the highest calcium content at the right point. Each dot represents a modeled feldspar composition, and the colors of the dots encode the degree of melting of the magma from which the feldspar crystallize after fractional crystallization, with hotter colors representing greater melting. The layered diagrams indicate increasing pressure, corresponding to greater depths within the crust, with higher pressure diagrams on the top. Finally, the left set of diagrams shows models without water, and the right set shows models with water. Payre could determine the probable conditions on Mars by matching the observed composition of feldspars with those seen in her models.

Payre finds this especially exciting because it mirrors her group’s findings based on the compositions of other minerals. “Previous studies have been showing different compositions in the volcanic rocks, and we saw that some were more alkaline, and some were sub-alkaline, and these kinds of models are producing the exact same trends and composition,” Payre explained.

This agreement confirms the credibility of the models Payre uses, but she wants to take this verification a step further. To make sure that her results are accurate despite approximations in her models, Payre performs experiments: she makes her own Martian magma by heating precise ratios of oxide powders at 1300-1450 degrees Celsius and pressures equivalent to thousands of Earth atmospheres. “I’ve been modeling magmatic processes with a software that is made for terrestrial rocks, and we know that Martian rocks have a pretty different composition,” she said. “They are, for example, iron-rich, and that could change a lot of things in any magma process, so it’s nice to be able to do experiments because we have the real composition.”

Through Martian investigations like Payre’s, researchers can learn about our own planet in ways that would never be possible through investigations here on Earth. “Everything I’ve been talking about is something that happened 4 billion years ago,” said Payre. On Earth, minerals from that time are scarce and rocks have been destroyed by various geological processes including tectonic activity, but such activity on Mars is believed to be nonexistent. The silent surface has preserved the past. “When we study crystal processes on Mars, we can understand better how these processes were on Earth at the beginning,” said Payre. Sometimes, we must look outward instead of inward to understand the ground beneath our feet.