Quartz is everywhere: it’s the most abundant mineral on Earth's surface. “It seems like everyone should know everything about this by now,” said Earth, Environmental, and Planetary Sciences Ph.D. student Patrick Phelps. But we don’t. “The fact that I can still say new things about something that on the surface might seem so mundane is really cool,” he said.

Phelps works in Cin-Ty Lee’s lab studying quartz crystals that come from pegmatites – igneous rocks with very large crystals. “When I say large, I mean there are some on the scale of a meter. I’m looking at smaller ones and trying to understand these bigger ones,” said Phelps. “Nobody really knows how fast they grow because you can’t watch it as it’s happening. Did that take a million years, a thousand years, a day?” 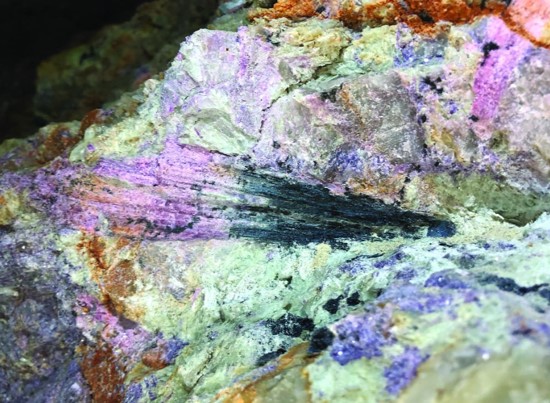 Before Phelps’s work, the best guess scientists could give came from conductive cooling models. “Where pegmatites grow in the Earth tends to be very shallow, maybe about 3 km or so down, which means when the material they grow from comes into the space where they grow, it doesn’t have very long before it cools off and completely solidifies.” Scientists can figure out the maximum possible time a crystal had to grow by determining how long the ground would take to cool down to a temperature at which the crystal would be mostly frozen. “People have found that the specific pegmatite I was working on took about 9 years to that point,” Phelps explained, “but the rates I’ve been getting are much, much faster.”

Phelps solved this problem by addressing it from a novel perspective. “My undergrad was in physics and geology. I realized that I could take what I learned in physics and apply it to problems that just haven’t been solved in geology.”

Phelps quantifies trace elements within his crystals and then uses diffusion-growth modeling to investigate the kinetics of crystal growth. Quartz consists of silicon and oxygen, but trace amounts of other elements inevitably get incorporated into the crystal. “The best way to think about it is like a snowplow. If I’m scooting my snowplow along, the snow in the front kind of piles up. Think of the snowplow as the crystal and the snow as these extra elements in whatever the crystal is growing in. If I move the snowplow faster, I’ll pile up more material; if I grow the crystal faster, I’ll get more trace elements,” Phelps explained.

Phelps employs two techniques to measure the amount of trace elements in his quartz crystals. “The first one is called microscope cathodoluminescence. I take my crystal, cut it so that I have a nicely polished surface to go under the microscope, and then I shoot the surface with an electron gun,” said Phelps. “Depending on the defects inside the crystal and on the electron energy, the crystal will luminesce in different colors.” The colors tell Phelps which parts of the crystal have the most defects and the highest concentrations of trace elements.

Once he knows where to look, Phelps can quantify the trace elements using a laser ablation inductively-coupled plasma mass spectrometer. “We shoot a laser at the sample, and that causes a small portion of the sample to vaporize. That gets brought into the mass spectrometer, which has a plasma that ionizes particles that are flying through, and it splits them down into ionized elements.” The spectrometer separates elements by their mass-to-charge ratio and quantifies them.

“A lot of what I’ve been doing has analytical solutions” – equations that you can write down and plug numbers into directly – “I have these nasty-looking equations but it’s something you can just plug in a growth rate and basically get a concentration out. I can figure out what the trace element profile would look like for different growth rates, and then I match it to the profiles I’ve measured. If it’s a close match, then that’s probably the right growth rate,” said Phelps.

“The equations were actually solved back in the 50s,” said Phelps. “A lot of problems were solved a long time ago in physics, but no one ever thought, ‘Why don’t we try that solution on this rock?’”

Phelps’s advisor Cin-Ty Lee fosters such interdisciplinary approaches to geology. “Working with Cin-Ty in general is very broad – you realize how much everything is connected,” said Phelps. Students in the lab have investigated topics ranging from the thermodynamics of earthquakes to chemical weathering to ornithology.

The lab environment also encourages a collaborative approach to investigation. “It’s never anybody’s one idea,” Phelps explained. “You’ll ask a question or Cin-Ty will ask a question and you’ll keep going back and forth, and all of a sudden he’ll say ‘hold on a minute,’ and he’ll go over to his desk or over to a drawer and pull out a rock and say, ‘Why don’t we try that with this?’”

Driven by this curiosity, Phelps plans to continue conducting research after he graduates with his Ph.D. “I have questions, and think I will always have questions that I want to answer. I want to be in the position to be able to answer them.”