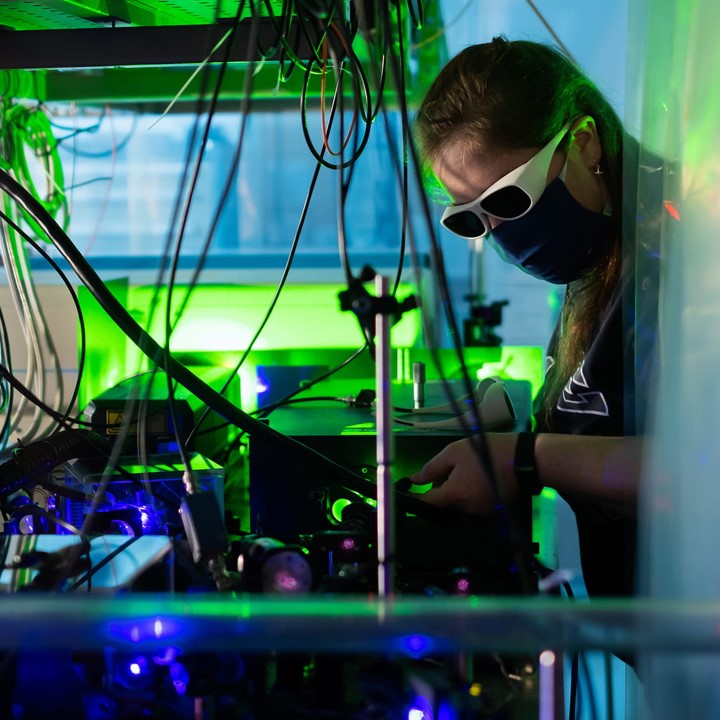 Most of us associate plasma with extreme heat: seething suns, lightning, flames. “A plasma is a kind of soup of positively charged ions and electrons,” explained physics and astronomy graduate student MacKenzie Warrens. Most of the plasma we see is very hot because it takes a lot of energy to overcome the attraction between the positively-charged center of an atom and its outer electrons, free up the electrons, and generate that “soup.” Warrens makes and studies her own plasma here at Rice, but hers is extremely cold. She and other researchers in Tom Killian’s group use laser cooling to produce ultracold neutral plasmas.

How can shooting something with a laser cool it down? Thermal energy comes from random motions of particles, and temperature is a measure of those random thermal motions. If we can make the motion of particles more uniform and less random, that corresponds to a decrease in temperature. Atoms only absorb certain wavelengths of light, and because of the Doppler effect the wavelength that an atom “sees” depends on whether the atom is moving towards or away from a light source.

Physicists like Warrens can select a laser wavelength so that only atoms or ions moving towards the laser absorb the light. Absorbing a photon (which has momentum) changes the momentum of an atom, and if the momentum of the photon and the momentum of the atom are in opposite directions (like when the atom is moving towards the light source), the change in momentum causes the atom to slow down. By selectively decreasing the velocities of the atoms in only one direction, they make the overall velocities more uniform and decrease the temperature of the system. In addition to helping Warrens generate ultracold plasmas, laser cooling also finds applications in areas like quantum computing because colder temperatures increase the order of a system and give physicists the sort of precise control they need to assemble “computers” on atomic and molecular length scales.

The ultracold plasmas Warrens works with behave fundamentally differently from the hot plasmas we’re more familiar with. Plasma physics can be divided into two regimes: strongly-coupled and weakly coupled. In a weakly-coupled plasma, the kinetic energy of the particles is greater than the energy of repulsion between adjacent positively-charged ions or adjacent negatively-charged electrons. Thermal motions scatter the particles chaotically. In the strongly-coupled regime, the energy of repulsion between adjacent particles of the same charge is greater than the kinetic energy, and this imposes order on the plasma. “The dynamics become a lot more complicated because you have spatial ordering, so your plasma starts to look more like a crystal rather than just a bunch of ions and electrons randomly scattered throughout space,” Warrens explained.

Normally, it would take immense force to squish the plasma into a dense enough state that repulsions between adjacent particles overcome thermal energy, which is why strongly-coupled plasmas are rarer in nature. We find them at the core of Jupiter, in white dwarf stars, and, closer to home, in plasmas used for nuclear fusion reactions. Cooling down the plasma to reduce the thermal energy rather than compressing it to increase the Coulomb repulsions provides a more practical way to generate and study strongly-coupled plasmas in the lab. “Being in the ultracold regime slows down the dynamics a lot and allows us to really see a lot of the physics that’s going on that gets washed out with high temperature and high density experiments,” said Warrens.

There’s a problem, though. Previously, each time they created an ultracold plasma, it would rapidly expand and dissipate in a few thousandths of a second. They could still image the sample and acquire interesting data from it, but expanding the lifespan of the plasma was obviously a desirable goal. Warrens recently co-authored a paper which described a way to use magnetic fields to trap the ultracold plasma and preserve it for several hundredths of a second, more than 10 times longer. “The magnetic field pushes on the plasma, basically squishing it to keep it in,” Warrens summarized. Besides increasing the lifespan of the plasma, confinement may allow physicists to laser cool plasmas to even higher levels of strong coupling than before, and magnetization also helps mimic plasma dynamics under the influence of stars’ magnetic fields.

In discussing Warrens’s physics, we’ve spanned orders of magnitude, from atomic-level interactions in plasmas to the dynamics of stars. If it seems overwhelming to you, you’re not alone, but Warrens wants to emphasize that physics is for everyone. “Physics has that bad reputation of being, like, absolutely impossible and completely esoteric, so nobody can understand it. It’s not true at all, but I didn’t always know that,” she said. “I went into my honors physics class in high school terrified of the subject. But the way my teacher taught the class was from a very intuitive perspective. She made sure we could solve the math problems, but she also made sure that we were able to understand on a deep level what’s going on, rather than just number crunching. Because of that I was able to see the beauty of physics, and it was less than a month into my junior year of high school that I realized I wanted to be a physics major in college.”

In addition to deeply appreciating the fundamental understanding of the universe that her discipline gives her, Warrens also enjoys the day-to-day practical reality of working in experimental physics. “I’ve always been a huge crafter, and while experimental AMO [atomic, molecular, and optical physics] isn’t exactly like sewing, knitting, or baking, it still has a lot of craftsmanship in it because we build our own apparatus,” she explained. “Not only do you have to understand physics in order to do our experiments, you also have to do some mechanical engineering and some electrical engineering too. Our experiment is one of a kind, a lot of the electronics we have are home-built; they’re the only one in the world that does that. It’s fun for me to be able to work with my hands and play with my physics.”