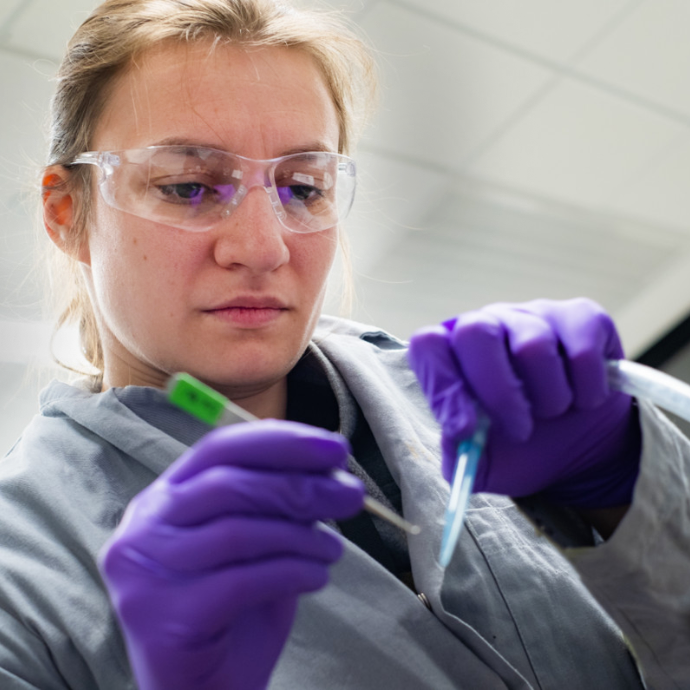 Improper protein folding can have grave medical consequences. Alzheimer’s disease and Parkinson’s, for example, emerge when misfolded proteins aggregate and disrupt the function of neurons in the brain. When proteins in the body come in contact with foreign surfaces, such as implanted medical devices, their interaction with the surface can cause them to denature. While we don’t have evidence to suggest that medical devices cause neurodegenerative diseases, the interaction of proteins with foreign surfaces, “can cause outcomes including inflammation, infection, and blood clot formation,” explained chemistry graduate student Lauren Warning.

Warning works under advisor Stephan Link investigating protein conformation at these types of interfaces. She can monitor unfolding of an individual protein by using specially-designed microscopes to measure the distance between two fluorescent dyes attached to the same protein. This gives her conformational information about the protein by telling her the relative positions of the parts of the protein to which the dye molecules are attached. Even with single-molecule fluorescence microscopes, however, it can be difficult to distinguish between two fluorescence sources located so close to one another because the signals overlap -- it just ends up looking like one big blob of light.

Warning addresses this problem using photobleaching -- the same process by which light from the sun gradually destroys dye molecules and fades colored plastics and fabrics that sit outside for too long. By shining a laser onto her samples, she can inactivate some of the dye molecules. Then, she can look at members of the protein population that are missing one dye or the other. She can subtract the individual signals from each dye molecule from the signal before photobleaching to determine which portions of the total signal correspond to each fluorescent dye. After pinpointing the locations of the dye groups, Warning can quantify protein unfolding on her experimental surfaces.

Using these techniques, Warning has found that proteins exhibit less conformational change on surfaces when they’re in environments crowded with other proteins because this crowding restricts movement. “A lot of times, when scientists investigate protein unfolding, they do it in a less crowded environment than you would actually see in a biological system that’s packed full of proteins. We showed that this makes a difference,” Warning explained. “Sometimes medical devices are made with biofilms designed to reduce protein adsorption, and this can also make the surface less crowded with proteins.” If surfaces packed with proteins reduce denaturation at the interface, then such biofilms might not be beneficial.

“My research provides me with an avenue to combine my interests in both physical chemistry and medicine,” said Warning. “When I first entered college, my plan was to go to medical school. I found pretty early on that I was enjoying my chemistry classes more than my biology classes, so I started getting involved with chemistry research.” Warning made the decision to attend graduate school instead of medical school when she saw a conference presentation about using lasers and gold nanoparticles to kill cancer cells and realized that she could impact human health while still pursuing the discipline she loved.

“I really like to teach general chemistry to an audience of people who maybe don’t realize they’re interested in chemistry because that’s how I was. I didn’t innately know I wanted to do chemistry; it was by interacting with very passionate professors that I developed that interest,” she said. After graduation, Warning plans to teach at the university level and help other students discover their passion for chemistry.