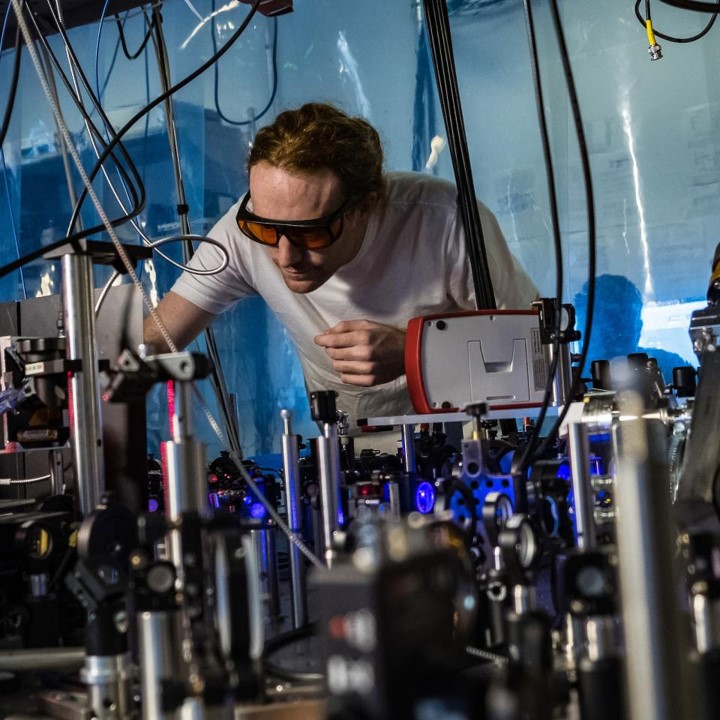 When we think about lasers, one of the first things that comes to mind might be ray guns that melt metal and burn holes in enemy droids. The idea of cooling matter down with lasers, then, might seem counterintuitive, but so does a lot of physics at the quantum level.

Researchers can tune the wavelength so that only an atom moving towards the laser experiences photons that it can absorb, while an atom moving away or neither towards nor away does not interact with the light. When the atom absorbs the photon, it slows down. Laser cooling generates a net slowing of the atoms moving towards the laser, which directs the velocities of the atoms in the opposite direction. By making the velocities more uniform, laser cooling decreases temperature.

Using this technique, Whalen takes atoms of strontium down to temperatures very close to absolute zero. Under these conditions, matter exhibits exotic behavior. Because the wavelength of a particle decreases with increasing momentum, very cold atoms that don’t move around as fast have longer wavelengths. Combined with the fact that atoms get closer together at lower temperatures, this means that atoms at absolute zero have wavelengths comparable in size to the distance between two atoms. “You enter a regime where the wavelike nature of particles is dominant.

Researchers exploit this property of ultracold atomic systems to study many different aspects of quantum physics. Whalen’s research focuses on a bizarre structure called a Rydberg molecule, which can be hundreds or thousands of times larger than an ordinary diatomic molecule.

“We take this cold sample and we promote one or maybe a few atoms to a very highly-excited electronic state called a Rydberg state. In a Rydberg state, the electron is now very far away from its parent nucleus and very weakly-bound.”

The energetic electron whizzes around in the ultracold gas and collides with other atoms in the gas to “create an attractive potential that the other atoms feel,” said Whalen. The attractive potential weakly binds atoms together into groups so “extraordinarily delicate and sensitive that they can’t really exist anywhere else in the universe except in our chamber and places like it,” said Whalen. “Even in deep space, the thermal energy of the particles would tear the Rydberg molecules apart.”

Researchers in the Killian group can control the size of their Rydberg molecules by controlling the energy their laser imparts to the strontium electrons. Whalen currently investigates how he can use this as a sort of ruler to measure distances in quantum systems.

“We’re developing a method of probing quantum states at length scales that have never been accessible until this technique,” he explained. This is important because the solutions to the equations describing quantum mechanical systems more complex than a hydrogen atom can only be approximated, and complicated systems like lattices of metal atoms present huge challenges even for computational approximation. Because physicists can’t calculate the solutions, they must find ways to determine them experimentally.