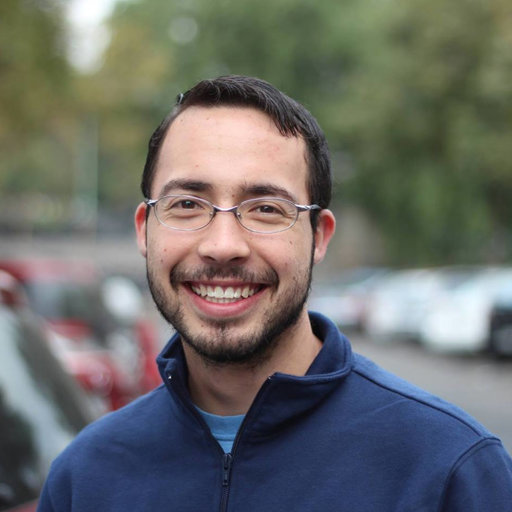 What do insulation, superconductivity, and magnetism have in common? All of these diverse and interesting properties of materials arise from the behavior of electrons in a lattice. Graduate student Eduardo Ibarra-García-Padilla from Kaden Hazzard’s lab seeks to understand fundamental physics governing electron behavior in lattices by stripping the system down to its very simplest form. To accomplish this, he creates ultracold atomic systems to serve as quantum simulations of macroscopic materials.

His quantum simulations give him the power to carefully tune the parameters of the system and isolate exactly the effect he wants to study. “The problem with normal materials is that they are very dirty. When you grow a crystal, it might not be a perfect crystal; it might have some defects or impurities,” Eduardo explained. “The benefit that we have with ultracold atoms is that the lattice that we create using laser beams is in essence a perfect lattice, and we have a high degree of control over how the atoms interact with each other.”

But wait, weren’t we talking about electrons, not atoms? In these models, the atoms represent electrons. Electrons have different spin states, +½ (up) and -½ (down), and only electrons with different spin states can interact with each other. Atoms also have spin states that control their interactions with one another, so Eduardo can use them to model that important dimension of electron behavior. Using lasers and magnetic fields, physicists can flip the spins of the atoms, so Eduardo can directly control the spin state of each atom in his model. “We prepare the atoms in different states, and depending on which state they are, we can tune the interactions between them,” he said.

For Eduardo, these spins represent other spins, but in principle, they can be used to represent anything we want. A particle with two possible spin states, either up or down, is analogous to a bit that can have the value 1 or 0. We can encode any information we want to in sequences of bits, and we can perform computations on that information through manipulations of bits; those manipulations correspond to the spin flipping physicists can do with lasers and magnetic fields. Thus, research in the Hazzard group enables other applications in quantum computing and quantum information.

Eduardo’s recent investigations have expanded beyond the simple spin up/spin down paradigm. “For spin up, I’ll call it blue, for spin down, I’ll call it red. But for an atom that has a larger spin, instead of just spin ½, you can have more states. So let’s say we have red, blue, green, and yellow,” he explained. “Now we put these atoms into a lattice, and when we have more color; if the interaction between two atoms with different colors does not depend on their colors this means we have a larger degree of symmetry in the system. So a natural question is if we have this higher degree of symmetry, what kind of phases of matter should we expect? Are there things we cannot see if we just have the red and blue combination? And the answer is yes.” Continuing with the red and blue description, if Eduardo prepares a system with one atom per site -- “think of it like a carton of eggs, where each atom is an egg,” he clarified-- and equal number of red and blue atoms, then the atoms form a checkerboard pattern of alternating red and blue spins. This arrangement is called antiferromagnetic.

“When we performed this calculation for a system with a larger spin (more colors), what we found is that the system is more antiferromagnetic than the one with spin-½ (just red and blue). There’s an easy picture for that; we just have more ways of putting a different color next to another one,” Eduardo said. “One of the exciting things is because of this, when we did the simulation and compared with experiments, we found out that our collaborators have the coldest fermions in an optical lattice ever so far, so it’s fun to brag a little,” he laughed. “So far for these systems with a high degree of symmetry, if they start at the same initial temperature, the ones with larger spin get colder. One of the biggest ongoing problems in the field is always ‘how can we get colder?’”

Years ago, when Eduardo first learned about the race to get colder, he didn’t realize the physical significance, and he thought it all really was just about bragging rights. “The first time I heard about all this ultracold atoms, I was in college, and I was just thinking, ‘wow this is just super dumb; it’s like seeing who has the fastest car.’” When he learned more, though, he recognized the true importance of research on ultracold atoms, and the field won him over. The colder we can get, the more exciting physics we see; colder temperatures give us access to effects we could never observe at higher temperatures, empowering us to understand the world in new ways. “I was super excited by the versatility, and I realized it was pretty cool! It’s pretty cold, actually,” he joked.