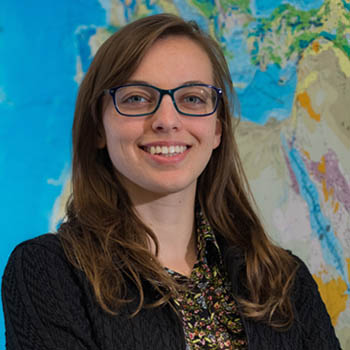 As her adviser likes to say, Rice graduate student Alana Semple is changing textbooks. Working with Adrian Lenardic, professor of earth, environmental and planetary sciences, Semple is enhancing our understanding of how the movement of the mantle affects what happens to us on the surface of the Earth.

The mantle’s thick layer of rock makes up 84% of the total volume of the Earth and lies just beneath the thin crust on which we stand. The mantle circulates and flows in different directions over thou-sands of years and influences many things on the surface — from chemical cycling to volcanic activity to the movement of the continents.

It was previously thought that tectonic plates move independently of the mantle beneath them and that the mantle only moves because the plates drag it along. “The textbooks will tell you that the major driving force behind why the tectonic plates move is that its heavy on one side and it starts to sink, which drags the rest of the plate along,” Semple said. However, detailed observations of the asthenosphere —the upper layer of the mantle — from a Lamont research group returned a more nuanced picture suggesting that the asthenosphere speed does not continually decrease with depth, but can peak at the center and decrease toward its top and base and that it sometimes appears to flow in a different direction than the tectonic plates.

“Our findings suggest that pressure-driven flow in the asthenosphere can contrib-ute to the motion of tectonic plates by dragging plates along with it,” she said. “A notable contribution does come from ‘slab-pull,’ a gravity-driven process that pulls plates toward subduction zones. Slab-pull can still be the dominant process that moves plates, but our models show that asthenosphere flow provides a more significant contribution to plate move-ment than previously thought.”