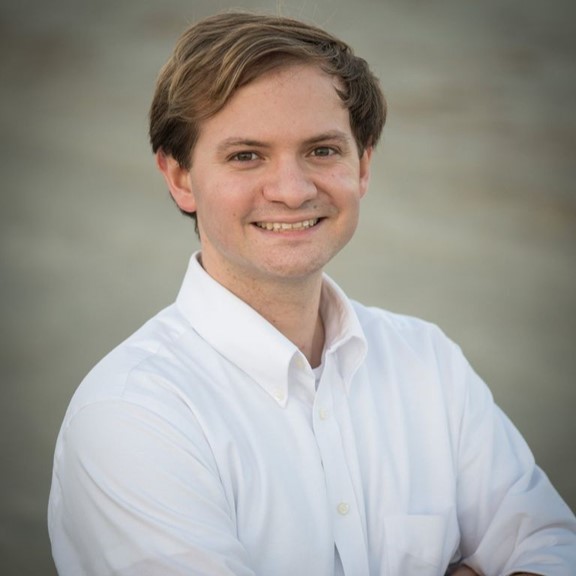 “If the Ph.D. doesn’t work out, I’ll be a pet store manager,” joked Adam Howard, a graduate student in the Department of BioSciences. Advised by assistant professor of biosciences Rosa Uribe, Adam conducts research in developmental cell biology using zebrafish. Part of his job is to help maintain populations of zebrafish that live in row after row of glass aquariums in the fish room. “My whole world revolves around what looks like a pet store,” said Adam.

As a developmental cell biologist, Adam studies how multicellular organisms originate from one cell. We all start from one cell. It turns into two, then four, then a whole bunch of cells. However, we do not know in complete detail how that first cell becomes an entire organism or how changes during development might result in changes at the adult organism-level.

These early cells in the embryo are stem cells, cells that have the potential to develop into many types of cells. A specific population of stem cells called “neural crest cells” (NCCs) are responsible for the development of many important tissues in the heart, skin, and gut of an embryo. In particular, pockets of NCCs found around the neck of an embryo — called vagal neural crest cells — give rise to smooth muscle cells in the heart, pigment cells in the skin and parts of the nervous system.

Although vagal NCCs are born in a small region that is similar to the adult neck and upper back of a developing embryo, these cells have far-reaching impacts. For instance, NCCs are important to the production of neurons in our gut, which is one of the largest neural networks in the adult body. The dispersal of vagal NCCs from the neck to the back end of the gut makes this movement the longest migratory event of any stem cells in embryos. Yet, relatively little is known about how vagal NCCs travel this far and how they position themselves below the neck.

Adam wants to understand the fundamental biology behind vagal NCCs: how do the cells behave and how do they know which tissue type to become? Currently, Adam is studying the genes that potentially influence the migration of vagal NCCs.

Hox genes, first discovered in fruit flies, are responsible for global body patterning. Hox genes are not only found in flies, but they are conserved in zebrafish and humans. In fact, zebrafish and humans share over three-quarters of their genes, so genetic studies on zebrafish can easily translate to humans. Unlike the embryos of other commonly studied organisms —like humans and mice — zebrafish embryos are optically transparent. This allows observations of individual cells while the fish is growing, which is a significant advantage for developmental cell biologists like Adam.

One gene, in particular, hoxb5, may be implicated in the formation of heart muscle, pigment cells, and neurons in the gut. Because gene expression requires the transcription of DNA into RNA, manipulations of RNA can directly affect gene expression. Using this knowledge, Adam injects mRNA directly into the cell to test the effect of hoxb5 on the migratory behavior of vagal NCCs. This approach is common in zebrafish developmental cell biology, where scientists see what happens when there is more of something, whether it is RNA or proteins.

Earlier this month, Adam presented part of his doctoral research at the Texas Zebrafish Conference at the University of Houston. There, he interacted with a portion of the scientific community who have worked with zebrafish, whom Adam found to be some of the “brightest and most collegial scientists” he had met. Adam hopes that some of the conversations he had there will spark collaborations. Exchanging protocols and certain lineages of zebrafish were already part of the conversation. The conference also exposed Adam to cutting edge research techniques, such as optogenetic tools that use light to control cells in living tissue.

Prior to his doctoral work, Adam explored clinical research and worked in the industry. Going into college, Adam thought he wanted to pursue medicine. However, upon acing his general biology exam, he looked into working at the lab of the professor who taught the general biology course. There, Adam fell in love with the pursuit of asking questions no one has asked before and finding the answers before anyone else. While doing research at the Texas Medical Center, Adam says he was bitten by the research bug, and couldn’t stop chasing after what life was about. Here at Rice, Adam appreciates the academic freedom to ask his own questions and the mentorship from his adviser, Rosa Uribe.