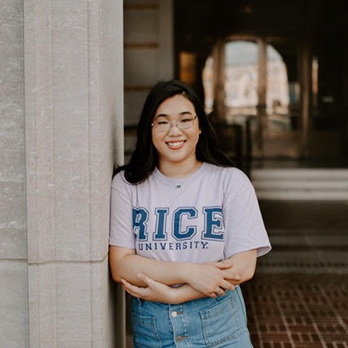 “Fruit flies got me into Rice," said Autumn Hildebrand.

Autumn's journey had its swerves and forks but in between, she forged a path she loves. While studying in her community college, she became interested in the lab of Julia Saltz and their work in understanding behavior influenced by genetic variation using Drosophila melanogaster, also known as the common fruit fly. In the lab, she found not only an open space to explore her passion, but also a dedicated support system that inspired her. Lab members like Marina Hutchins, Autumn’s bench mentor and a graduate student at Rice, were influential figures that persuaded her to take a step forward and apply to Rice University. She became a full-time student the next fall, continuing to not only be an active member of her lab, but also the Rice community.

Autumn is a neuroscience major on the pre-med track. She is particularly interested in neurotrauma and observing changes in behavior, plasticity and other mental activities after neural changes have been made. As an advocate for scientific literacy, you can find her eating with members of SpecNeuro, a neuroscience journal club that discusses new research in the field over lunch or you can find her on campus working with Rice’s very own student-run neuroscience-based community magazine NeuroTransmitters. Her latest piece is on an interest that precedes her time at Rice. “My niche within the organization is neurotrauma, and my next article is my personal interview with my science superhero in the Texas Medical Center, Dr. Kitagawa. Dr. Kitagawa is a trauma neurosurgeon and I've been following his science since I was starting community college in Fall 2020. Being able to talk to him for my article was such a cool experience and I don't think I would have been able to do that without my opportunities and involvement at Rice.”

Autumn’s quest for discovery, knowledge and outreach doesn’t stop there. She also works with the Rice University Student Government’s Academics Committee to connect interested undergraduate students with graduate students in the same scientific field. Furthermore, she is a facilitator for Rice Pre-Medical Society’s Big Owl/Little Owl program where she moderates bi-semester meetings with working physicians and pre-medical students at Rice.

Her desire for science outreach spans the local Rice community. Excited to open up the same pathways for other students, she works with the Provost’s Office to engage community college students with STEM research in Rice campus labs. Autumn has continued to be a member of the Saltz lab, the place where she first found herself at Rice. Currently, she is on track to publish her research with her bench mentor, Marina Hutchins. She has been studying the genetic variation of behavior through the lens of maladaptive social information and exploring the following research questions: Do varying genotypes in Drosophila melanogaster lead to occurrences of maladaptive social information? Does mate choice copying happen in the presence of gathering social information? How does learning from other individuals impact an eavesdropper's decision making process?