The ‘model minority’ myth and how it harms Asian Americans

“The “model minority” concept originated in the 1960s, during the rise of social movements addressing the U.S. war in Vietnam, the environment, and racial and gender equality. Sociologist William Pettersen praised Japanese Americans for overcoming discrimination, arguing that their ability to do so compared favorably with Black/African Americans, who were treated as problem minorities.

“The model minority image stratifies non-White racialized groups by pitting the “good minorities” (Asian Americans) against “bad minorities” (Black/African Americans). But both communities are systematically deemed divergent from the White cultural norm — or “othered.” Further, this drives a wedge in a long history of cross-racial solidarity between Black and Asian American communities.

“The model minority image ostensibly congratulates Asian Americans while simultaneously leaning on the image to discount and marginalize their existence.”

Excerpts  from “The burden of being “model”: Racialized experiences of Asian STEM college students”
Journal of Diversity in Higher Education, 2017, 10(3), 253-270.

This qualitative study used narrative methodology to investigate what becoming a scientist or engineer entails for Asian and Asian American college students stereotyped as “model minorities.” 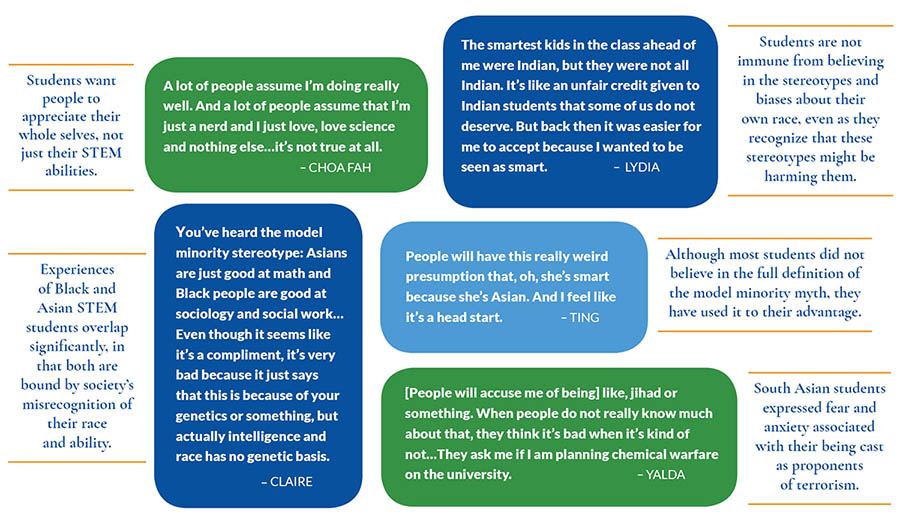