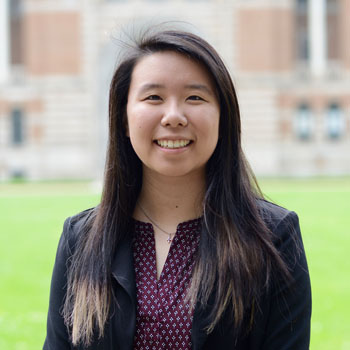 If you've ever used a fitness or diet app, you are familiar with their pitfalls: tediously entering every calorie into a clumsy device is time-consuming and requires a level of patience known only to kindergarten teachers. For Susan Schembre, former director of the Bionutrition Research Core at The University of Texas MD Anderson Cancer Center and now at University of Arizona College of Medicine-Tuscon, this presents more than a mere annoyance. It is an obstacle to efficiently collecting data in her research on obesity-related cancer and to providing important dietary feedback to study participants. Rice undergraduate Annie Shen '19 has been working with Schembre to overcome these problems by developing a new tool to collect personal dietary information that can be evaluated quickly and meaningfully.

There are a number of problems with the current dietary assessment methods, Shen explained. They collect a ton of data, including every macronutrient consumed. This is not only tedious for the patient to complete, but also a lot of data for researchers to process. Even the National Cancer Institute's self-administered 24-hour recall the ASA24, which Shen described as "basically the gold standard of dietary assessment," is guilty of these shortcomings. "Even I hated filling out the ASA24," Shen said. "Our ultimate goal was to develop a tool that didn't need to collect so much data."

To design a superior dietary assessment tool, the team referenced the FDA manual, grouping commonly consumed foods with similar American portion sizes and caloric densities. This was a key step in the design as grouping by these criteria allowed for important distinctions between categories, like the distinction between ice cream and frozen yogurt, which are similar in portion size yet drastically different in caloric density. Their tool, currently named the Abbreviated Food Screener (AFS), uses an average caloric value for each category, which allows for the researcher or physician to track the frequency of consumption of specific food groups and the proportions of empty calories being consumed in a way that is convenient for both the patient and the researcher.

In a preliminary test, which focused on the consumption of high-fat and high-sugar foods, the AFS was found to be consistent with the more burdensome ASA24. The secret to its success rests in its user-friendly design. Before the participant goes to sleep, the AFS sends a text that prompts them to take a short (10-30 second) survey about their consumption of specific groups that day. In contrast, the ASA24 requires the user to document everything they eat for the prior 24 hours, which often takes an hour to complete and is less accurate because users have a difficult time remembering what they ate over such a long period of time. "People were more likely to document their snack foods on the AFS," said Shen.

Schembre and Shen are excited about the potential applications of their work. The convenience of the AFS makes it a prime candidate for development into an app, while its versatility will give Schembre and other researchers a better method for gathering data and developing healthy eating interventions as part of their research on reducing obesity-related cancer risk.

Shen will continue working on this project during her senior year, expanding the AFS to include additional food categories such as sugar-sweetened beverages, fruits and vegetables and developing feedback that can help motivate positive dietary behavior changes.

This experience was Shen's first exposure to the field of public health and was an opportunity for her to gain exposure to the clinical side of research, specifically instrument development, program planning and biostatistics. Being able to visualize and apply many of the concepts taught in her public health classes further fostered her interest in the public health field and led her to join the Rice-UT Public Health Scholars Program, accelerating her path to a Master of Public Health degree. "This program allows me to pursue not just my interest in the health field, but also to further my appreciation for aspects of science, research and innovation," said Shen.