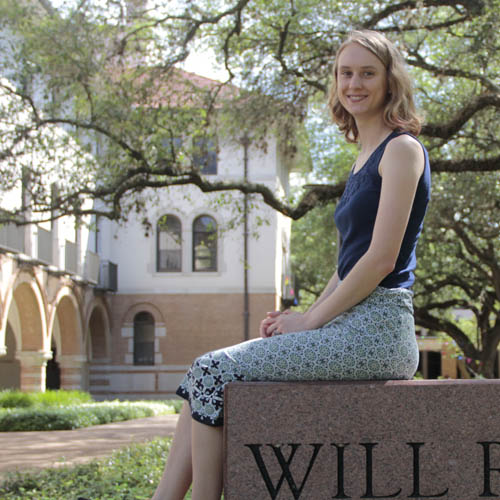 Hallie might secretly be the product of a classified science writers selective breeding program organized by the apparently sweet but actually scheming director of communications for the School of Natural Sciences, Lauren Kapcha. Probably not, though.

Regardless, her parents began teaching her the beauty of both science and the written word from a very early age. She recalls endlessly poring over detailed, colorful images of imaginary beings, strange creatures and far-flung places while her English teacher mother read to her. Growing up on North Padre Island in Corpus Christi, TX, Hallie also spent much of her childhood at the beach. Her marine biologist father taught her to study the ocean as a proper scientist, searching every crevice for new creatures and new knowledge. She still remembers the day when he first picked up a handful of sargassum from the water, shook it, and like a magician revealed a miniscule, hidden world of fantastic organisms: nudibranchs, sargassum shrimp, tiny crabs and so much more.

Even as a child, Hallie knew that she would become a scientist, but she originally believed that she would follow in her father's footsteps as some sort of biologist or ecologist. She didn't discover her love of chemistry until she was in high school and had the opportunity to work on a project in the lab of phycologist/toxicologist/ecologist/modern Renaissance man Paul Zumba at Texas A&M University-Corpus Christi, with the guidance of environmental biochemist Hussain Abdulla. Here, she worked on a project investigating the effects of different nitrogen sources on toxin and pigment production in the cyanobacteria (blue-green algae) Microcystis aeruginosa. In her reading, she found herself fascinated by the molecular structure of a toxic compound the cyanobacteria produced, called microcystin. She wondered how that molecule interacted with human cells to cause poisoning and what purpose the molecule originally served for the cyanobacteria, but she didn't yet have the tools to fully understand those questions.

When she started studying organic chemistry, she again found herself marveling at molecular interactions and enthralled by the way her understanding of those interactions could tell her so much about the world around her. In class one day, her organic chemistry professor James Tour articulated a common theme underlying many chemists' passion for their discipline: "I can look at you and see what's going on in your body. I can see how the molecules in your body are reacting and working together," he said. "Isn't that just amazing?"

Hallie loves chemistry because of its vast potential for applications that change the world for the better. For this reason, she currently works in the Tour lab assisting graduate student Emily McHugh as she seeks to create new antioxidant materials that may help patients heal after injuries and illnesses that generate many free radicals in the body, such as traumatic brain injury.

Hallie's appreciation for chemistry does not preclude exploration of other scientific fields. As many chemists are quick to point out, chemistry is the central science. Lying at the junction of biology and physics, a well-educated chemist has the tools to understand concepts and problems in those fields, too. Hallie sincerely hopes that during her time writing for the School of Natural Sciences she can share some of her love of all things science with her readers.